There are so many positive words that could be used to describe my mother Cindy. Caring, compassionate, faithful, hard-working, respectful and trustworthy to name a few. She’s been this type of individual for my 20 years of life. Through thick and thin she has never wavered. While I’ve never spent a day at work with her, I can tell that she’s good at her job. I know this because for anyone to work at the same place over 30 years shows that people value her work, her opinion, and what she brings to the table. For that, I would like to say thank you to all those people she has worked with that have allowed her to have this opportunity and made her work and opinion feel important. No matter how stressful work was or how challenging her life has been at times, she has always been a good mother to my brothers Riley and Jordan and to me. We would like to honor our Mom with a brick at the Plaza of Heroines for her 33 years of service and for her generosity, kindness and hard-working attitude that can be traced back to her upbringing and the difficult things that she’s gone through in her life but was able to overcome with grace.

Cindy Ruth was born to Ralph and Elizabeth (Case) Neubauer February 27, 1965, in Marengo, Iowa. Shortly after that her family moved from Brooklyn, Iowa, to Iowa Falls, Iowa, where she spent most of her childhood with older siblings Natalie, Barry and Scott, who later became important caregivers to their little sister often. Iowa Falls has always meant home, family, love, neighborhood and great memories, many including her Grandpa Dale Case and aunt, uncle and cousins from out east, the Buckleys. Her parents’ marriage ended dramatically by unfortunate life decisions her father made when she was only five years old but watching the faith and strength of her own mother throughout her youth helped her become that same type of woman to this day. The relationship with her dad remained difficult all her life. She moved to the farm with her mom and stepfather during ninth grade and graduated from Radcliffe High School in 1983, gaining valuable friendships along the way while maintaining so many with those lifelong Iowa Falls friends. Cindy dedicated her heart to Christ at the age of 16 when facing the challenges of that move and transition in her life and to also help her cope with the abandonment by her dad. Cindy was awarded a Maytag Scholarship from her mother’s company to attend a one-year secretarial program at Ellsworth Community College, which she completed in 1984.

She moved to Ames to start her secretarial career, first at the North Grand Mall Management office, then with the first formed Ames Convention Bureau and later began that long career at Iowa State University. She met her husband, John Stuve, who she married in 1988, and they created a beautiful family of all boys – Riley John Stuve born in 1991, Jordan William Stuve born in 1995 and Samuel Case Stuve born in 1999. This was really her best job in life, she would say, motherhood. They lived in Nevada for a few years but mostly raised the family in the very special Southdale neighborhood of Ames where the next generation of home, love, neighborhood and great memories kept growing. Those days of lovingly caring for her little boys, carpools, Kate Mitchell Elementary school days and friends, sports, practices and ballgames were years full of laughter, love and joy! Mom would say that her greatest accomplishment was raising us with Dad through 21 years of marriage and then on her own as a single parent for over 10 years. By 2009, a family crisis reached a critical stage and despite divorce, she used her strong faith in the Lord, the love of family and friends, and her secure job at ISU to move forward the best she could. We know that all she did, including working hard at ISU all those years with so much on her plate, she did for her to reach that goal of raising us into fine young men.

Mom would say trusting in the Lord all her life was her mainstay and helpful in leading her to meeting Mark Hopton in 2017, marrying in 2018 and moving to Waukee where they live sharing the same life values and priorities in loving Christ, their church, family and friends, and helping others. She gained two beautiful stepdaughters, Olivia and Simone. They, combined with all the Stuve guys, Riley’s special gal Kayla and Jordan’s wife Christel, enjoy their family time together. The most recent family blessing for Mom is becoming a grandmother as Jordan and Christel Stuve gave birth to Jensen Jeffrey (JJ) in November 2019.

As Mom ends her career at Iowa State University on March 6 after 33 years, she will always treasure what she learned and gave to others, the people she met along the way, incredible friendships, being a huge Cyclone fan, and the honor of working in Admissions as a Secretary I (3 years), the Center for Agricultural and Rural Development (CARD, 3 years) and Human Development and Family Studies as a Secretary II (7 years) and Political Science and Community and Economic Development/ISU Extension and Outreach, also as a Secretary II and later promoted to Secretary III in 2017 (20 years).

Throughout Mom’s entire life, I believe she’s left a positive impact everywhere she’s been. From all those special neighborhoods and towns to her many years at ISU, she’s given it everything she’s got to make the world a better place. We would like to thank Iowa State University for employing her for a great 33 years. And while we are unsure what lies ahead for her, what we do know is that she’ll give it her all and things will be better than the way she found them. We wish her the best in her next journey! We love you, Mom! 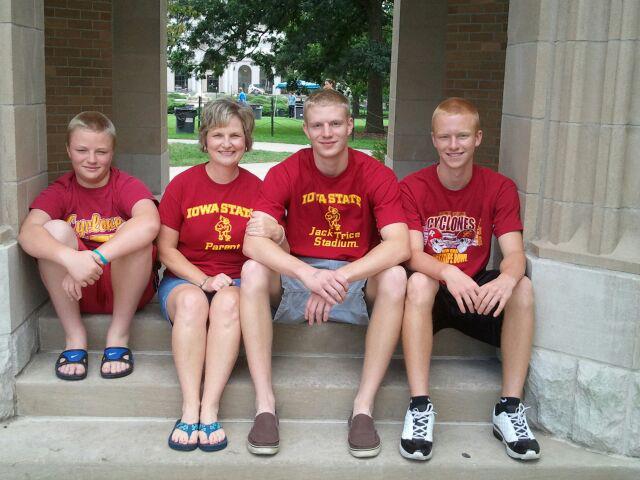